Realme GT 2 will debut as early as the end of February or early March. It will be available in three colour options – White, Green and Black. The handset is expected to be a mid-range offering.

The Realme C31 and Realme C35, on the other hand, are said to launch in India in early March. The C31 will be available in two colour options – Purple and Green, while the Realme C35 may come in Green and Black shades. The Realme GT 2 comes with a 6.62-inch Full HD+ AMOLED display and a 120Hz refresh rate panel. Under the hood, the phone is powered by a Snapdragon 888 SoC with up to 12GB of RAM and 256GB of internal storage. It draws power from a 5,000mAh battery unit backed by a 65W fast charging support.

As for the optics, the Realme GT 2 comes with a triple camera setup at the back, including a 50MP primary camera, an 8MP ultra-wide lens, and a 2MP microlens. It has a 16MP selfie shooter on the front. The GT 2 packs a 5,000mAh battery with support for 65W fast charging. 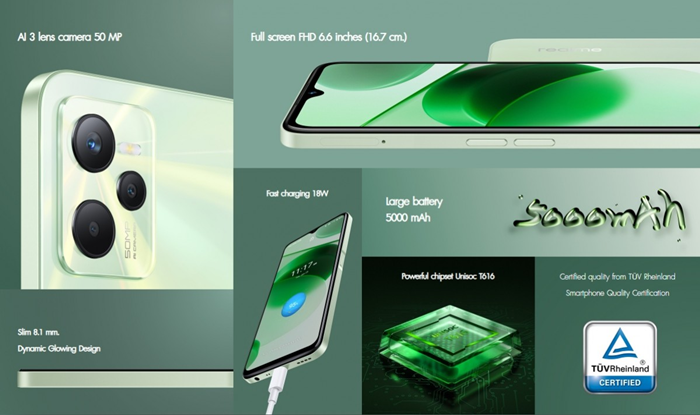 Realme C35 has debuted in Thailand on February 10. Going by the Thailand variant, the C35 flaunts a 6.6-inch Full-HD+ LCD display. Under the hood, the device is powered by an octa-core Unisoc T616 chipset paired with 4GB RAM and a 64GB storage option. The C35 draws power from a 5,000mAh battery that supports 18W fast charging. The handset has a triple camera setup at the back, including a 50MP primary, a 2MP macro, and a 2MP depth sensor. It has an 8MP snapper on the front. The device runs Android 11-based Realme UI 2.0 out of the box.